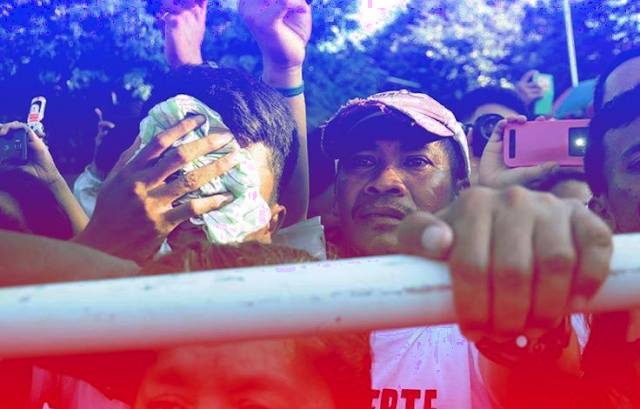 This blog is supposed to have my journey in Software Engineering and Development, but this post will be an exemption. I am not an effective and persuasive writer but hear me out. I am calling all my fellow filipinos to consider mayor Rodrigo Duterte to be the next president of the Republic of the Philippines. Please do not leave yet.

I am writing this post while I am in the midst of heavy traffic here in Edsa, I am riding a bus, yes, that's my first point. Can't you see? Heavy traffic is every filipino commuters' problem every damn day. Think about this, if Abaya and our dear current president - Mr. Aquino are effective leaders, our dear MRT and LRTs would not be what they are today. My fellow filipinos, more trains and high quality and maintained rails could be the solution to this traffic jam problem in Edsa, right? The mayor has revealed his plans to solve this problem [1], and we have the same ideas, my fellow filipinos.

Thank you so much for investing your time continuously in reading this blog. Next point: Crime and security, my fellow filipino people. We've seen many crimes and even experienced being a victim of it for several times. I tell you what, I've been dreaming for a time when all filipino people need not to worry for their bags when walking in a certain place. I've been dreaming for a time when all filipinos can be confident to put out and use their own things they worked for outside their houses even in the middle of the night. I believe in the mayor when he promised that he will suppress the crime within 6 months [2].

YES. I've dreamt of it many years ago even when Mr. Duterte was not yet known in social media. My fellow filipino people, it is now the time to effectively erradicate the crime in this pitiful country.

Corruption. Filipinos have been the very victim of this. Corruption has always been in the politics and it seems that most of the filipinos don't give a damn about it. They're fine with it. Imagine what we could've been if there was no corruption after the term of former president Marcos. If the mayor promises he can stop, just believe in him [3]. I know it's hard to believe in his promises, but hey guess what? We've been there. Even in love, it's hard to believe in your partner's words, but you just gotta trust him/her.

Implementing what he had implemented in Davao. Here's my last point. I know that a one page of my blog is not sufficient to list all the necessary points why should we vote for Mr. Duterte. I always get astonished whenever I see the photos of Mr. Duterte's accomplishments in Davao, specifically the 911. Davao City is one of only three areas in the world, after the United States and Canada, to have the Integrated Emergency Response System 911, a fully integrated, computerized response system linking the people of Davao City to the emergency resources of the government. [4] So basically I want these in my whole country: 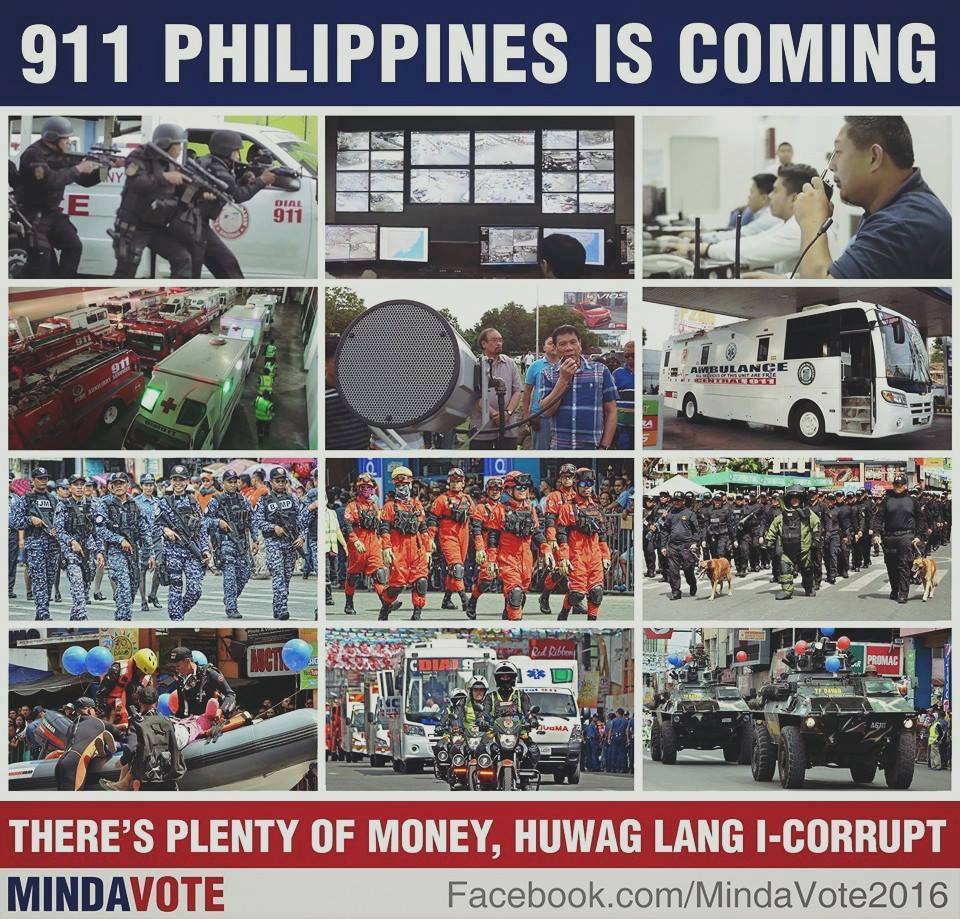 I can't help but to notice the other supporters of our dear mayor, come on, people! Don't be childish. Before posting any photo that has a quotation of a certain person, provide a source. Please! Provide a source, you will look dumb if you do that, sorry but that's the truth.

So, as for my closing statement, MY FELLOW FILIPINO PEOPLE, please think many times before you vote the other presidential candidates. If you still love this country and your fellow countrymen, you'd vote for either Mr. Mayor Rodrigo Duterte or Madam Miriam Santiago. Let us make this country great again by starting the discipline from your self and voting right.


"I HOLD IT AS AN ARTICLE OF FAITH IN GOVERNMENT THAT THERE CAN NEVER BE GROWTH AND DEVELOPMENT AND PROGESS IN ANY CITY, PROVINCE, IN THE COUNTRY UNLESS THERE IS STABILITY, THERE IS PEACE AND ORDER"
- MAYOR RODRIGO R. DUTERTE.
Tweet