I Left Objective-C and I’m Staying With Swift

 
It’s been 5 months since the last time I posted a blog post here. I was so very busy, actually until now I am busy, that there’s no word that can describe how busy I was and I am. Anyway, I am handling multiple projects using Swift. The last time I used objective-c in an iOS project was last April, before I left the deteriorating company (just kidding). So yeah, here I am today, doing my very best to write another blog post about my experience with the awesome Swift. By the way, I will try my best to make some new tutorials, like how to properly integrate PayPal to your iOS project SERVER-LESS!

Swift is just awesome, I began using Swift when I entered to a new company last April (2016) (read: http://www.prettyitgirl.com/2016/05/1st-day-of-work-in-new-company-as-ios.html). I used to cursed Swift for being weird because of its optionals features, I hated it so much, just like when I hated objective-c when I first used it last September 2015. When I first used objective-c, I told myself that if only objective-c is C#, I would be awesome using it, objective-c for me back then was an alien-dedicated programming language, I mean the syntax is for the alien people. Now, back to the Swift, when I first used it, darn, I was like: “What the heck is this optional thing? Is this necessary?” 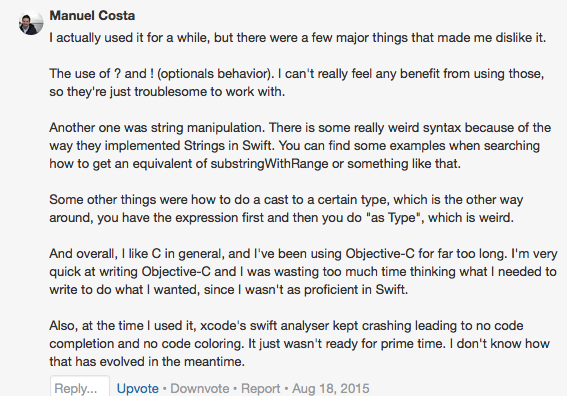 I fully understand the man above, I disliked Swift, I used to. Well, not anymore! I’m here to promote Swift. Swift is a young programming language and Apple has been in effort of improving this, from the first version of Swift up to the latest 3.0. Swift is the future! Open source community has been working hard to make the server side frameworks made in Swift to make them stable for production.
Tweet

Do you have the link for this tutorial?
I will try my best to make some new tutorials, like how to properly integrate PayPal to your iOS project SERVER-LESS!

Hi Vignesh, I will do a tutorial tonight about that, since you've requested for it. :D Thanks.

Well you did a good job and I think it is really wise to go with Swift since they are amazing and you aren't going to regret going with them. Lets see how it goes.