A Week In South Korea 🇰🇷

This is Glenn, writing. I am composing this blog post in a coffee shop called “Angel-in-us” located in Seoul station, hours before our flight back home. I never thought that I would be posting again on this blog. The following are the thoughts of my wife about the country, its people, and everything - well, mostly mine, she’s not here, she’s currently at Lotte Mart.

Let’s begin, start everything with Day 0 (Monday), cause why the hell not? In my field of work, data are to be started with zero lol. We arrived at Incheon Airport here in South Korea at around 10:30 PM, as far as I can remember. Hopped into a shuttle to go to a concourse to pick our luggage up, then travelled again to Seoul station, and walked a few km to our place.

While strolling, we saw a homeless gran. She talked to us in Korean, obviously we didn’t understand anything. She was smiling and perhaps asking for money or food. All fellow Koreans merely ignored the poor lady. Well, I was just surprised. A well developed country having so much rubbish plus a homeless lady wandering at late night. When we were in Singapore, I believe I saw one homeless aged woman too, selling stuff.

---- Fast forward, I left this post in my draft folder, and I had to wait to go back in the Philippines to force my self finish writing. I’d like to keep this post now as short as possible. ----

I forgot to mention that the timezone of SK is GMT+9, Phillipines has +8. So morning, it was cold, I loved it. Saw some posters of well known kpop groups in the subway. I tested as well their free internet connection and gaddamn it was fast. I think SK has a faster internet connection compared to Singapore. Not sure, can’t remember. We had our breakfast at Myeongdong Two Two Chicken, their chickens are the best! We went to a place where there are lots of palaces but unfortunately all of those were closed. My wife and I next moved on to meet my cousin, had our lunch at Myeongdong. My cousin introduced to us the street foods there and some few Korean words we could use.
Did you know?: You can throw your used toilet paper in the bowl, just toilet paper. Apparently their toilet papers are water soluble or whatever correct term should be used for that. You don’t want to do that here in the Philippines. The structure of our sewers are poorly made that they can be easily clogged.

My wife and I went to Ewha University, took a couple of pictures there and went ahead to uhhh somewhere in Seoul to rent Hanbok and visit the castles. While this experience is a must have, it was fucking exhausting. I enjoyed it, it made me more interested in Korean’s culture. The day did not just end there. We travelled next to Seoul World Cup Stadium then had our dinner at their hidden food court.


Did you know?: Although this might be nonsense to you, I’m still going to mention it. Their hidden food court is on the same floor with their department store (clothes and everything). There must be a reason why our malls here in the Philippines do not put food courts and stalls on the same floow with the department stores.
Also, Koreans clean their shits up afrer eating. They deliver their plates to the counter of the food store and throw their wastes on to the proper trash can. Self service for everyting baby. Guess what? My wife and I had our breakfast in Jollibee just hours ago and it’s funny that we decided to bring and do such good habit.

Nami Island is the main thing to visit today. We grabbed quick an Iced America, as usual, for faster caffeine intake. And boy their bread is awesome, I am talking about their crossaint, and the coffee shop’s name is Café StoryWay. We met a filipino along the way. The weather was damn hot but the wind was blowing cold, enough to compensate the skin piercing sunlight.
Next stop was still in Gyeonggi-do, I can’t remember the name of the garden but it was a flower and plants garden lalala. Edit: it's called Morning Calm.


Did you know?: Their buses and trains are freakin on time. Especially the bus. When they say it leaves at 6:00 PM, it should be on its way at 6:01 PM and no one can hop in anymore.
Also I think the grans in South Korea have so much previledges, so much that they just spit on any train stations. My wife saw one lady spit on her hand and gaddamn she wiped it on to the handrail. God bless that thing.

First stop was Han River. But before we went there, we had our buffet “brunch” at the Meat-ing (unlimited Meat), then next my wife tried to buy some Korean dresses lol.
Next stop was the Namsan Tower / Park… It was beautiful but tiring af. Dinner was at the Myeongdong Two Two Chicken, this time I ordered a draft. That draft was cool.
Did you know?: Korean stores do not let customers try and fit the clothes they wanna buy. That’s just sad.

We met again my cousin and she treated us, for the second time, our “merienda” and dinner (buffet). Oh we went to Sorae windmill. It was cool.

I left our stuff for a couple of minutes because I had to go to the toilet, and boy our things were still at their spot when I came back. We had to do that again when we went to the windmill and took some cool photos. 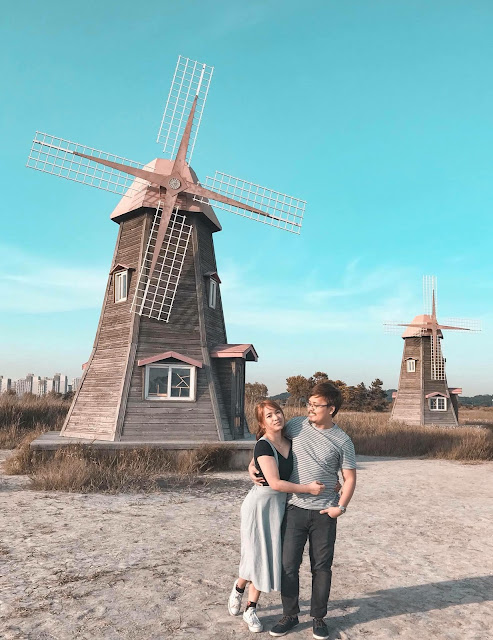 So that was pretty much it. There are tons of stories that can be included here, but I choose not to because time is indeed gold, and I have to work on something else much more important. South Korea has flaws, nevertheless, we’ll certainly visit again. I’ll surely miss those times when my wife and I had the freedom to roam without having our bags checked and without putting our stuff in front of us to prevent get pickpocketed. I need to mention this too, there are lots of pretty ladies there, and super cute babies. My wife knows that, that's undeniable. lol. Lastly, what I like the most in Korea is that you can take a dump almost everywhere, because in every train stations, regardless of its line, you can find a very nice comfort room.

P.S. I admire South Korea’s train systems more than the Singapore’s. It is damn impressive. Their country is fckin awesome, (we have yet to visit other countries like Japan, most probably next year we’ll be in Japan or U.S), SK is too awesome. It makes me wonder where we (Filipinos) went wrong, why we are not as developed as SK. Corruption? Perhaps the fact that most Filipinos are uncompetitive? Or because Marcos and Aquino happened?

Only because Marcos happened.